We begun the tour with what we thought was an early start, meeting the group at 7:40 am after breakfast.

Our tour guide Gerty (Gertrude, but she doesn’t like to be called that way “it sounds like Get Rude, I’d rather a name without the word rude in it” fair enough Gerty it is) welcomed us warmly, and we joined the truck and met the rest of the group most of whom had already been travelling together from Victoria falls for over a week. As we step in the truck, which will be our home for the next 12 days, Gerty introduces us to the group: she says it’s been a difficult journey, since none of them can talk or hear. She speaks with sign language, but when it comes to miming the animals everyone starts laughing… Rob is hugely confused but eventually the penny drops – A great joke to welcome us newbies!

We start making our way to Etosha national park, a long day driving for over 500km. We stopped at a small village to see a local market, haggled down the price of some hand crafted animals (from tourist rates to slightly better tourist rates), and had our first lunch cooked on the truck, put out a table in the middle of nowhere put out 12 chairs (10 of us, plus Gerty and our fabulous driver Tai). The first lunch was kept interesting by a small scorpion walking next to our feet (Rob spotted it). As you do, in Africa. (The only time ever people have said that Rob was very observant – how little they know) 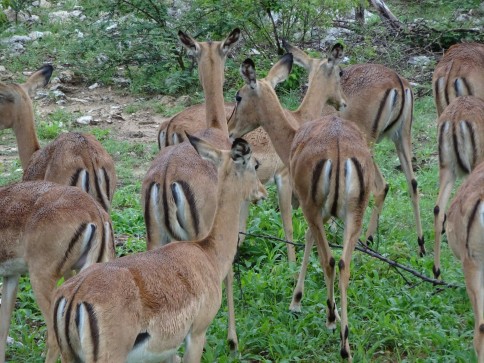 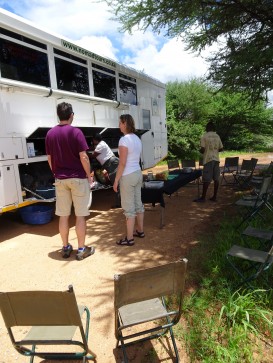 After lunch we carry on our journey, and as entered Etosha national park at around 5pm we started game driving on our way to our accommodation. We saw some zebras straight away, and a lot of different types of gazelles: impalas, Kudu, Springboks. Rob points out tactfully to the Vegan that he has just tasted most of them in Cape Town. 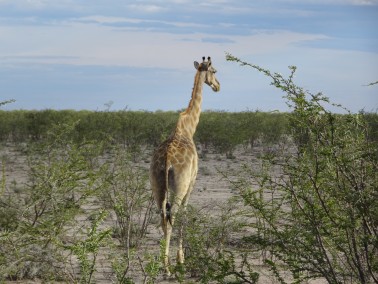 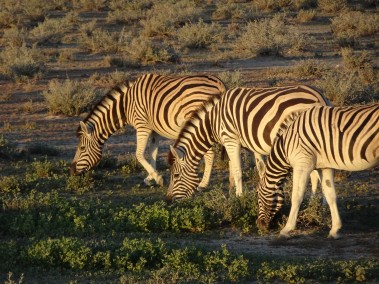 Bruce and I also saw a Rhino, but we didn’t manage to stop the driver in time, and it was already hiding in the bushes so nobody believed that we saw it! We started doubting it ourselves, considering the tiredness and the long drive.

We arrived at our accommodation, and split up, as 5 of us are camping and 5 are accommodated. The lodge was incredible, amazing big rooms, and very nice landscapes. Beautiful sunset by the waterhole, although no animals. Most lodges in Etosha park have a waterhole where animals gather to drink.

We had dinner by the truck in the camping site, and jackals came to visit us. They cheekily tried to steal our bread! Bed early, and no struggle to sleep.

Day two was a real early start, on the move by 6:30am. Full day of game driving.
We were lucky in the early morning, as soon as we left the lodge and started our drive we saw a cheetah walking next to us. We followed her, hoping for a hunt. She managed to make some impalas run away, and she started to get followed by jackals who were hoping to steal something from her catch. In the end she got lazy and started to lie down after having a little scratch on the tree. Just like Jenkins would have done!

Then of course zebras, giraffes, jackals, wildebeast (gnu), antelopes… you almost get used to them after a while!
Before lunch we stopped to see the Etosha Pan, what used to be a lake millions of years ago which is dried up, and is now a salt pan. The sun was so bright, and the Etosha Pan was so white that it was difficult to keep your eyes open, even with sunglasses.
We took some photos, playing with the perspective and making the most of the fading horizon.
A truly beautiful place. 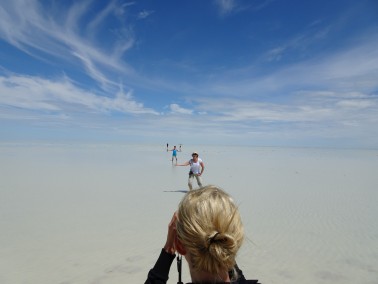 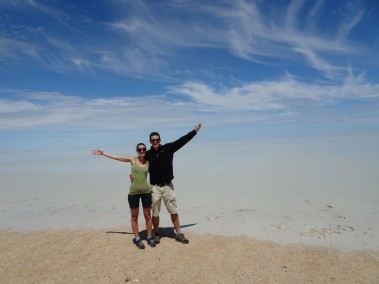 We stopped for lunch, and had some time in the pool of the lodge in which we stopped. Amazing temperature of the water, perfect to freshen up from the strong Namibian sun. A little sunburn was inevitable… we never learn our lessons! We tried playing Waboba in the pool, which is a little rubber ball that you hurl at each other and bounces on the water. Mati managed to smash Rob in the face a suspiciously high number of times.

We met another truck of 22, doing 54 days across Africa… called Ultimate Africa. One for the bucket list!

As we arrived in our camp at Okakujo, we went to the watering hole for sunset which was stunning, although no animals. After dinner we tried again, and the second time the watering hole gave us more satisfaction… We saw two rhinos drinking from the waterhole! It was really dark, but you could just about see them…an amazing experience. Also a nest of sociable weavers – very noisy birds that live upto 400 in a massive nest – funny listening to them chattering away.

We woke up early again and started game driving at 630am – we didnt see many new animals – apart from a pair of bat eared Foxes which were very cute and seemed hugely loved up. (Get a room! Comments were flowing as they were licking each other’s ears). 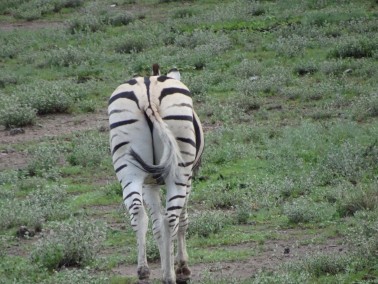 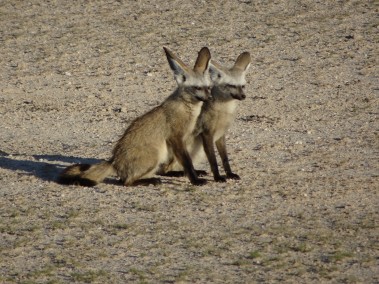 We went back to the lodge and had a massive english brekky – lush!
Then we set out again and drove off to our next lodge – our last 2 hour drive in the park.
Gerty shouted “3 lions are in the road” – but we assumed she was joking as she is a wind up queen.
But she wasn’t this time! Three female lions were crossing the road and sauntering away into the bush trying to find some shade to protect from the heat of the sun. Breathtaking!
Another 30 mins later – and the truck slams to a sudden stop – Rob bangs his head into the seat in front 🙂 and we know it must be something big. 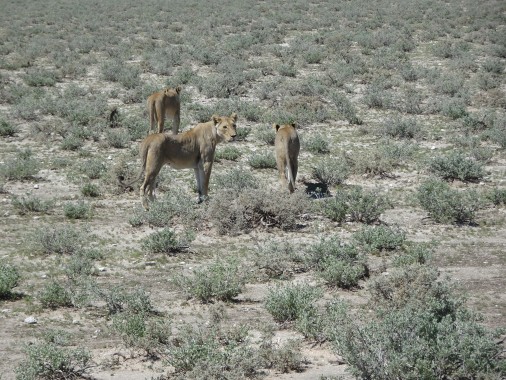 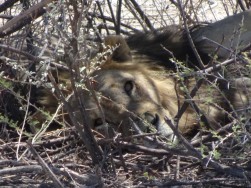 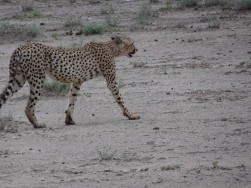 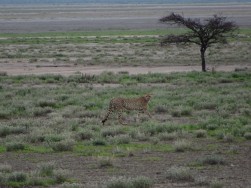 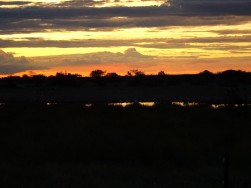 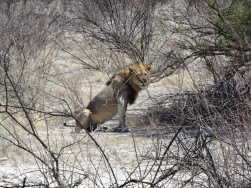 Another Lion and this time a male – finding some shade to chill out in. He curls up under a tree and looks very zen. A lot of people suggest that Rob goes out to tempt him closer for better photos.
Amazing times ! It’s not the best season (wet season so plenty of water and animals don’t need to group at watering holes) so we know we are very lucky.
We then arrived at Outzo and had a nice afternoon chilling by the pool, with 50p beers flowing. We met a very interesting swedish lady called Monika who has been travelling to 73 countries – not a bad effort!

In the evening we ate at our truck as usual, but we gave Gerty a break and some of the group have bravely decided to cook for us all. The pizza was really nice actually, just a bit lower from Italian standards… We soon ended up in the bar, and unexpectedly tequilas started to flow along with Amarulas and mad jacks (tequila watered down but with tabasco in)… Hangover ensured for tomorrow!

This is where we're currently at. View the full map here.